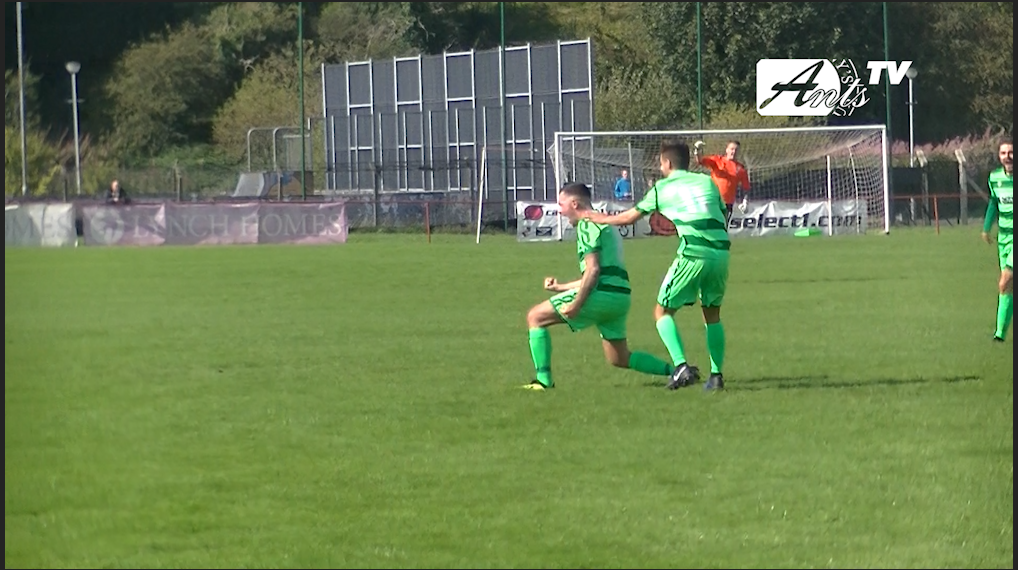 The Ants managed to scrape past Maybole at Ladywell Stadium thanks to a stunning strike by Chris McLaughlin in a match that wasn’t the greatest to watch but came with an important three points as they looked to climb the table.

The media team missed the opening 30 or so minutes, but we were informed that the Ants hit the post, and that Maybole also had two good chances which they should have taken. When we did eventually take up our spot it was a disjointed end to the first half we saw from the visitors with Maybole having the better of the chances. The Ants only real chance of note saw Edwards find McGarroch inside the box, but the hitman couldn’t get his shot away with a mixture of last gasp tackles, and the ball getting caught under his feet, and when he did finally get the shot away it was blocked for a corner which came to nothing.  Two minutes before half time the home side took the lead, a cross into the box by Hannah found SCOTT BATES in the box, he got the break of the ball and did well to nip in ahead of Littler to prod the ball past Patrick who could only watch as the ball evaded him and trundled into the bottom corner.  Buoyed by this Maybole went close only a minute later when Bates turned provider but Holland couldn’t find the target

The second half saw the Ants look a bit livelier and Johnson had to be alert from a McLaughlin free kick which bounced just infront of the keeper but he held on well. From his kick out Maybole almost doubled their advantage when Patterson found Holland but again the strikers effort lacked direction and went harmlessly past the post. The Ants were handed a golden opportunity to equalise in the 56th minute when Patrick’s goal kick put McGarroch through on goal but he was pulled back as he went into the box by Frame and ref Hay had no doubt as he pointed to the spot. Having dusted himself down up stepped GARY MCGARROCH to put the ball past Johnson although the keeper appeared to get a good hand on the spot kick an levelled the scores up at 1-1.  Just after the hour mark McGarroch came close to putting the Ants infront with a header from a McLaughlin free kick but the header went past Johnson’s post then McLaughlin had a speculative effort which went high and wide. Maybole for their part saw Holland have a shot well blocked by Marshall.

The match winning moment came in the 76th minute when CHRIS MCLAUGHLIN picked up a loose ball in the middle of the park and drove forward, before unleashing an unstoppable shot from the best part of 25 yards past Johnson and into the top corner of the net much to the delight of the small band of Ants fans who had made the trip down. Maybole weren’t out of this one yet though and on the 80th minute must have thought they would equalise when Bates found Stevenson all alone inside the box but the sub managed to scoop the ball over the bar when scoring seemed easier. Two minutes later Hannah put a great ball across the box but no Maybole player could get on the end of it and then in the first minute of injury time the same player had a great shot equalled by a similarly great save by Patrick and the Ants held on for their first away win of the season.